Video on development of 1-3 months

Heading: Development from 1 to 4 Months

Scene: The baby lies on his bed, moves his limbs, looking here and there with his eyes and then stares at the moving mobile hanging above him.

Narrator: You will probably notice the differences in your baby compared with the first month. He now spends less time sleeping, and shows increasing awareness and interest to his surroundings.

Scene: A three months old baby lies on his bed, watches the moving mobile happily. He moves his arms and kicks his legs. He also moves his body and stretches his arms trying to reach the mobile.

Narrator: By the end of third month, your baby can move his limbs more smoothly and kicks his legs with force occasionally. He tries to touch dangling objects by moving his arms and body eagerly.

Scene: The mother puts her baby lie on his tummy on the sofa and uses a toy to attract him. He raises his head and chest up by resting on his forearms. The mother then holds his baby up and he can keep his head steadily and looks at his mother.

Narrator: When lying on his tummy, he is able to lift the head and chest by supporting his body with his forearms. He can keep his head up fairly steadily when being held up.

Scene: The baby opens her hands, grasps a rattle put near her palm and brings her two hands together in front of her eyes and look at them.

Narrator: He can keeps his hands open at times or even grasps a rattle placed in his palm. He likes to bring his hands together to look at and play with them.

Scene: The baby lies on his bed, looking around with interest and he sees clearly his mother moving around.

Narrator: As for vision, he can recognize familiar people at a distance.

Scene: The mother brings her baby out in his stroller to a shopping mall. The baby looks at his mother talking to the saleslady attentively.

Narrator: When going out, he likes to explore the surroundings with his eyes. His vision follows the movement of familiar people,

Scene: The mother moves a toy in all direction in front of the baby and his eyes follow it closely.

Narrator: or objects at near.

Scene: The baby turns her head around when she hears her mother calls her. The baby makes some happy sounds when the mother plays with her.

Narrator: Concerning his hearing and speech, he turns to look at you when you call him from the side. He smiles on hearing familiar voices, especially his mother’s voice. He starts vocalizing sounds like “Uh” “Uh”.

Scene: Different babies use smile, crying and cooing to communicate with their carer.

Narrator: For social communication, your baby enjoys being played with. He uses social smile as a means of communication and uses crying, different facial expressions and cooing to express his needs.

Scene: Mother plays with her baby in the sofa. The baby makes different sounds to express his feelings.

Narrator: Concerning his language development, he can distinguish your emotional tone of voice. He starts to make and imitate different sounds. However, the sounds produced in fact have no specific meanings.

Narrator: Spend more time with your baby, singing songs to him to enhance parent-child relationship. 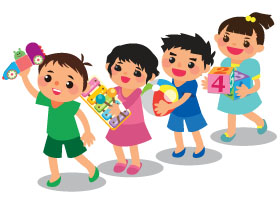 What you can do to help your baby’s development

What babies can do

What you can do

I can move now

I want to play with you

Put cotton wristbands on me so I can play with them

Put a colourful rattle in my hand for me to play 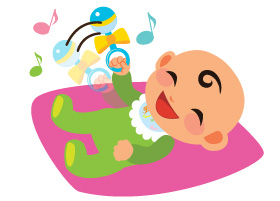 When I reach 1 month, I can slowly open my hands. At 3 months old, I can grab things put around my palm

When I am lying on my tummy, I can support my body with my forearms and trying to lift up my head 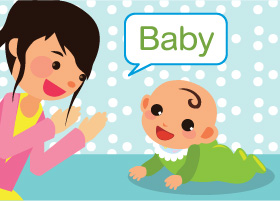 Lay me on my tummy and call out my name. By raising my head to look at you, I can exercise my neck muscles

Spend altogether 30 minutes for such activity every day!

My skull is still fragile and my neck muscles are weak

To protect my fragile head and neck

My neck will sprain easily because it is not strong enough to support the weight of my head. So remember to support my head and neck with your hand when bathing and shampooing me 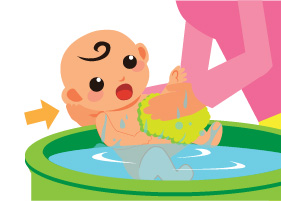 I can see more clearly

At 1 month old, I like looking at your face as well as objects in contrasting patterns 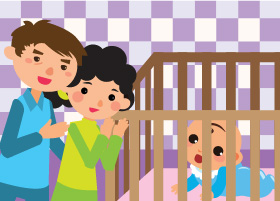 You can also hang colourful musical mobiles over my crib. I can see as far as 30 cm (12”) now 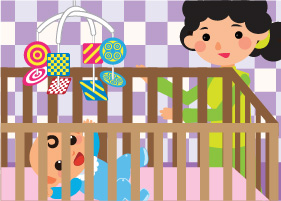 At 2 months old, I have a sense of distance and can see more clearly, including colours

I am curious about my surroundings. Let me face outward when carrying me. Place me upright in my baby seat where I can see people

I enjoy watching you moving in front of me

Let me have eye contact with you often. You can make different facial expressions, e.g. raise your eyebrows, nod your head or smile to me. I will respond to you in time through making sounds and facial expressions

I can hear your voice!

I want you to talk to me

I am very sensitive to sounds. I will make sudden movements, wink or raise my eyebrows if I hear unexpected sounds. I am not scared but these are my reflexes instead. At around 3 months old, these reflexes of mine will disappear gradually

Hum a tune or speak to me tenderly

Play soft music or turn on a music box for me At this time, I can recognise the voice of my caregivers. I like parentese, especially mommy’s voice!

Speak to me in parentese. Although I do not understand what you say, the more you talk to me, the better you will help my language abilities develop

I am very sensitive to touch

I am very sensitive when you touch me

I can learn more about the world through touching things 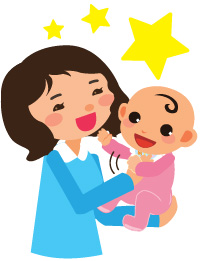 Often carry me and rock me tenderly

Let me play with rattles and wristbands made of different materials

Please refer to “Are the toys of your baby safe? “

I love communicating with you

If you talk to me, I will respond with sounds, too! 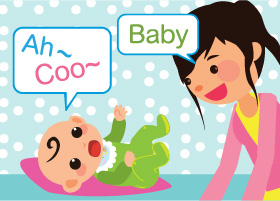 You can talk to me more and encourage me to imitate different sounds. I feel your love for me by seeing your rich facial expressions and hearing your joyful voice

I have emotions, too

I will show my surprise, anger and cheerfulness by my voice, expressions and postures You have to spend more time understanding my temperament

Sometimes I seem to be ignoring you, but it is all because I have very brief attention span

If I am tired and irritated, I will turn my head away and gets grumpy. You can give me a break by stopping the activity or changing my position

Read more on child development of this stage:

Are the toys of your baby safe?

So you think that pricey toys should be safer? There are many different toys available in the market, but parents should choose toys that are safe and facilitating babies’ development. As babies under 1 year old like putting toys into their mouth, parents should take into consideration the design and materials of toys when shopping for babies. Let’s learn how to pick the safest toys for our babies!

When choosing toys for your babies, you should bear in mind: 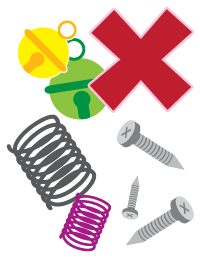 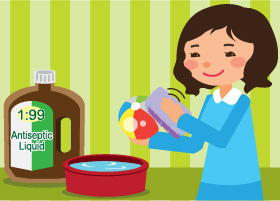